She’s not brown; she’s black. Still, Hershey is a very good name for her. She really is sweet!

Hershey became a part of the Evans family when Charles realized she’d been rejected by her birth mother, a nanny who had twins one dark night and, for whatever reason, decided to put all her efforts into only one. Charles called Amanda to see if she would like to raise a kid on the bottle and Amanda (always the nurturing one) didn’t hesitate.

Now that kid is so much a part of the family she eats, sleeps, and plays with someone all the time. One she particularly loves is Jared. She follows him around when he’s home, nipping at his trouser cuffs, piling on his chest when he tries to kick back, seeking kisses every chance she gets.. Maybe that’s why Jared recovered from the flu so quickly–so he could get back to work and leave Hershey behind. Jared isn’t big on sweets anyway.

I believe Candi is the one who said Hershey lay between her feet while she washed the dishes, which wouldn’t have been bad if she just wouldn’t nibble on her shoes. 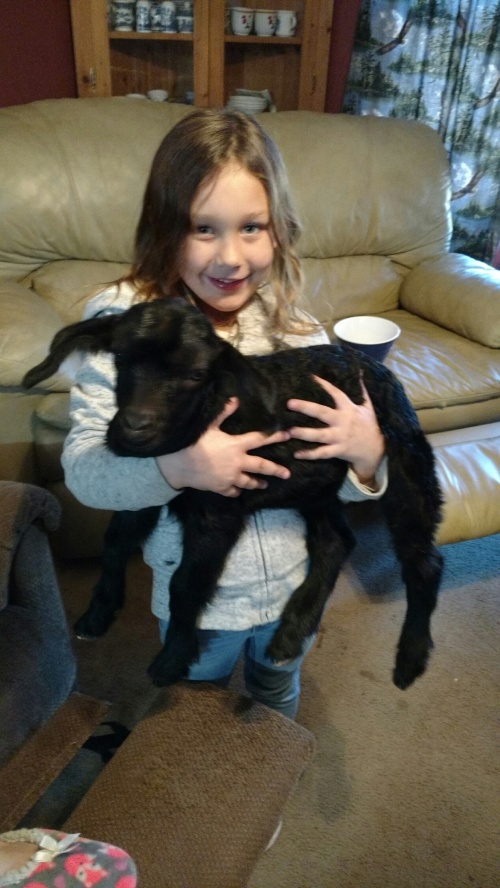 Hershey reminds me of our first little kid. We had not yet acquired a flock of sheep or a herd of goats. Charles helped that nanny to deliver and, just as Hershey was abandoned, so that little kid found no favor with her birth mother. So Charles brought her home. That kid was the greatest entertainment for William and for us. She was so cute, bleating for all the world like a human baby, cuddling up under my chin. One night I had the bright idea (may have been April 1) of teasing my sister in North Georgia about our kid. She knew we were on a waiting list to adopt. I would tell her we’d just gotten a kid and let the little one cry on the phone.

It worked. Suzanne was on the other end of the line screaming with excitement as the little kid bleated in my arms. When I finally told her the truth, I was the one who felt most let down, I think. The joke was on me! No matter how sweet that little goat, she couldn’t take the place of the human baby I longed for.

Amanda and her children have snuggled this baby, given her a bottle on a regular schedule, wrapped her in blankets, cleaned up her messes and practically taught her the English language. Amanda has reported proudly her weight gain, how she sticks out her tongue, her cute lovable ways. Hershey loves to run around the house, leap onto the couches, and untie everyone’s shoe laces.

But Hershey isn’t potty trained. That is becoming more and more of a concern. I’m beginning to hear war stories on her sloppy behavior. So I think soon Hershey is going to be re-introduced to a pasture. Though it may be a shock to her at first, it wont take her long to learn what to do with lots of grass and leaves and hay instead of measured amounts she’s offered. She will love sporting in the sunshine, becoming acquainted with occupants of the outdoors–birds, turtles, field mice, and the wilder side of the dogs she’s grown up with.

It won’t take her long because she was born for the outdoors, the larger space.

Hershey has been treated like a human baby and probably has been a little confused, what with dogs and children surrounding her, as to who she really is.

But, to put it simply, she’s wired as a goat. A goat she will be. And, I predict, a very happy one.

And I think Jared will be a very happy man not to have to shove Hershey out of the way in order to take a shower!

By the way, I think we, when we splash into the glories of heaven someday, will be ecstatic with our new wide open spaces, room to run, a chance for a chat with our Creator, blessings everywhere we turn including new friends and very old ones. We were born for feasting in heavenly pastures! We were wired for communing with Jesus.