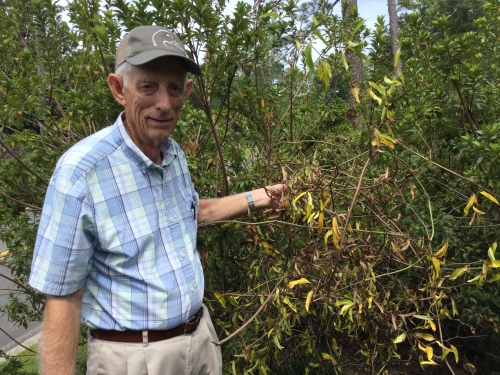 Charles and some of his half dead vines

“Look at this,” Charles says pulling foliage aside so I can see a massive formation of a vine’s origin. He’s carefully uncovered this insidious “thing” which is threatening the life and beauty of a camellia bush. He’s trying to uncover it enough that he can kill it with chemicals. Digging it out and cutting it away only encourages bits of root remaining to sprout faster.

He has been digging them out, he and Ulysses, for years. Many times I’d go out to find them gloating over some humongous armful of growth they’d extracted from the earth with pick ax, shovel, and whatever was at hand. But after months and years of removing knobs, knots and tumors only to have them come right back, he is resorting to chemicals added to the back breaking work.

There are vines that grow overnight. They really do–almost. Jack and the Beanstalk is a fairytale. No vine grows that fast. But then there’s kudzu, honeysuckle, wisteria, morning glories, and that awful vine that twists its way up through the shrubbery disguising itself amongst its host’s leaves until it’s too late for easy removal. Those are the ones that grow from globs of tubular roots as mentioned above. Charles calls them potatoes but I shudder to think of cooking and serving that potato!

Charles remarked one morning at the breakfast table that when God promised thorns and thistles after Adam and Eve’s disobedience, He really kept that promise. Thorns and thistles are a constant challenge to those who work the soil.

Some of these insidious enemies are quite beautiful when they bloom and if they are kept under control. Who would want to eradicate all morning glories? Or take the scent of honeysuckle entirely away? And what about lovely purple wisteria, its blooms drooping lushly like so many clusters of grapes? Regular pesky weeds, like dandelions and spiderwort, can be seen and battled in the open. But the vines creep out and up from the very roots of the shrubbery they threaten to throttle.

How do they even get started so close to the base of a shrub that it’s impossible to dig them completely clear without harming the camellia or azalea? Charles speculates that maybe birds drop seeds in these very inaccessible places. It’s hard to imagine these formations starting from mere seeds but maybe so. Anyway, once started, the vines put out shoots, roots, grow knobby “potatoes”, and climb quickly toward the sun waving tentacles of foliage in great victory.

One of Charles’ newest methods of “killing” is to pull vines out and away from the shrubbery, then spray those branches repeatedly. This means that when we walk around the yard we find these lanky, even snake-like, vines laid out on pavement and grass in various stages of death.

Some enemies in the plant world were intentionally brought to our country by well-meaning agronomists. I remember when my dad, along with many others, bought a starter of kudzu because it was recommended for fighting erosion and good for cattle grazing. Now north Georgia is mounded in the big-leafed wonder. It swaths the trees; it buries abandoned houses; it swallows old cars. Instead of looking for shapes in the clouds, traveling children can spy them in the massive kudzu growth: a giraffe here, an elephant there, a man in a hat, an old bent woman; a whale. Yes, some folks have discovered, in their resourcefulness, how to make walking canes out of thick gnarled vines and use vines and roots for medicinal purposes. I’ve even heard of people eating some portion of kudzu plant. But have you seen kudzu soup on a menu lately?

Wisteria and trumpet vines are so pretty growing on a trellis or, in the case of wisteria, kept trimmed in the form of a bush. But keep a sharp eye out for those sprouts that can thrust their way up a stone’s throw away from the original growth.

A gardener’s work is never finished. But the reward is a beautiful garden.

As we fight these monsters in the grass and bushes, I can’t help thinking how easy it is in our lives for bad habits, less than savory speech, and ugly thoughts to sprout and spread. And, like thorns and thistles and invasive vines, one battle does not eradicate the evil. It takes repeated applications of repentance and acceptance of God’s grace.

But as for you, be strong; don’t give up; for your work has a reward. II Chronicles 15:7