A Lamp To My Feet 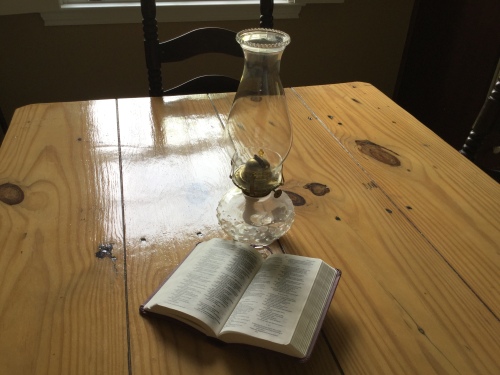 Today’s child may not have an image of a lamp that might guide one’s feet, at least not as clear a one as a child of the 1950’s would have. The verse from Psalm 119:105 reads, “Thy Word is a lamp unto my feet and a light unto my path.” What does that mean? That we hold God’s Word, the Bible, against our feet as we walk? Or that God’s Word is like a light for our feet. And what would a portable lamp really look like?

Electricity, known as “lights”, were installed in our house when I was about fifteen. Prior to that our light was from the fires, the one or two flashlights, candles, and kerosene lamps. Lamps were very, very important. Someone had to light each one in the house before dusk turned to night. Someone had to wash the chimneys each week to keep them bright and clear so light from the wick would be strong. Someone had to trim the cotton wicks so the flames would be even and give out a good steady light. Someone had to replace wicks trimmed so many times they no longer reached the kerosene in the bowls below. Someone regularly had to refill the bases with kerosene from a large spouted can.

There was one lamp to light the stairs, one for each bedroom, one for the kitchen, and two for Daddy’s study where Mamma read to us each night. If one was needed elsewhere it would be borrowed and then returned to its usual place. Normally, a lamp was never taken outside. So maybe I wouldn’t have such a clear image of a lamp lighting one’s feet if I didn’t remember that night in 1953.

It was a borrowed lamp on a summer night that lit the feet of two of my sisters as they left our house trailing down the hill. We could see a halo around the girls’ feet as they walked. It was a dark night with no moon to show the path so the lamplight guided them around obstacles in their way. That light jiggled with every step Jackie took and became smaller and smaller in the distance. My little sister and I watched from an upstairs window, sorry that we weren’t allowed to go on this strange adventure. Not that Ginger and Jackie were “allowed.” They were just going anyway.

Usually Ginger instigated adventures but this time it was Jackie’s idea. We knew someone had joined Stan and Charlie who were spending the night in the little guest house at the bottom of our hill. We heard a car, saw its lights turn off, heard loud laughter, occasional shouts, and even some music. Mamma and Daddy, at the back of our house, were apparently oblivious to the party at the foot of the hill.

“I just know John has come and we need to go get in on the fun,” said Jackie, trying to convince Ginger who was already dressed for bed with curlers in her hair.

“I don’t know,” said Ginger. “It doesn’t sound like only brothers to me. They’re loud but never that loud.”

“Oh, please, let’s go. John’s come all the way from Atlanta. He’ll be hungry. We’ll take them some bread and butter and surprise them.”

Jackie finally won, they took the lamp and slipped down the stairs and out the door.

There was something prophetic about Jackie’s taking the lead that night. Because the fellow visiting our brothers was not John. It was the Virginian who would become Jackie’s husband. He told us later that when he saw Jackie that night her face was spotlighted by the dim glow of the lamp whose chimney was woefully smoked from the jiggly walk down the hill. Jackie’s look of total amazement when she saw Fred triggered something in his chest.

Somehow the image of that small pool of light around our sisters’ feet as they walked that night comes to mind as I read this verse. The lamp lit their way right then guiding them around sharp stones, sticks and pine burrs. Probably Jackie was barefoot.

But, jumping ahead, The Word, God’s lamp, lit Jackie’s path into following His commands on much greater decisions, such as whom she should marry. Just so His Word can give us immediate help as well as long range guidance.

There are only two prerequisites for one’s receiving this wonderful guidance: 1)read the Word, the Lamp, to hear His voice, and 2)submit to His leading as you follow His path.