It was a beautiful day for walking amongst the trout lilies, one of those sunny, not quite hot days in mid-February that make us so happy to get outside. Neither Charles nor I had demanding appointments and we started out eagerly to explore the trails of Wolf Creek Trout Lily Preserve, the greatest expanse of trout lilies in the world, right here in Cairo, Georgia. Some years we totally miss the show and maybe they were past their peek this week, but we agreed we could hardly have absorbed any more beauty. I thought about my brother John who would have been so happy to know we were walking in the woods on his birthday.

Walking in the trout lilies we also found many other interests: spotted trilliums, a rare variant four-leaved trillium, an orchid that will bloom in early June, beech drops, blue stemmed and needle palmettos, at least on Florida maple tree, lots of hardwoods, some elderberry bushes, muscadine vines, ferns, two creeks, some other visitors fun to talk to, and well-serviced paths with excellent markers.

The trout lilies literally cover acres of forest floor with their golden blooms. Individually, they aren’t showy flowers. They’re so low it’s hard to photograph them without lying down. But all together as they sweep between avenues of tall trees, they make a spectacular show. As we followed the meandering trails exclaiming over each new discovery we talked about our friends Cecil and Sue Hinson. Cecil’s forestry business was able to donate these some 140 acres for preserving the lilies and other beauties. And Sue spent happy hours photographing flowers and all. I enjoyed looking at some with her not long before her untimely death. They were some of our favorite people and we miss them so much. But tramping the trails makes them seem close.

The deep burgundy trilliums are actually more dramatic as individual blossoms. I so enjoyed finding them blooming beside rotting logs, a hornbeam tree, or snugged up against a gnarled oak tree. We first became acquainted with the spotted trillium 350 miles north of here on Black Rock Mountain, then were surprised to find them here the next year. They bloom here about three weeks before they do on the mountain.

The beautiful burgundy trillium also blooms in the mountains.

We were intrigued by the little crane fly and green fly orchid plants. We wouldn’t have known they were there had it not been for the wonderful markers. The marker announces there will be orchid blooms in early June so maybe we can go back then. Right now the plant seems an odd combination of low leaves with purple undersides and funny dried stalks.

We found blue stemmed and needle palmettos. The needle palmettos have pointed fronds but I saw no sign of blue stems on plants identified as such. Maybe the blue is right at the soil line or appears at a different season. I remember how taken I was by the palmettos of any name on my first trip to South Georgia. I carried a frond back with me to my dorm room at UGA and pinned it on the window curtain. Of course, I was far more “taken” by the South Georgia boy I’d been to visit named Charles Graham! 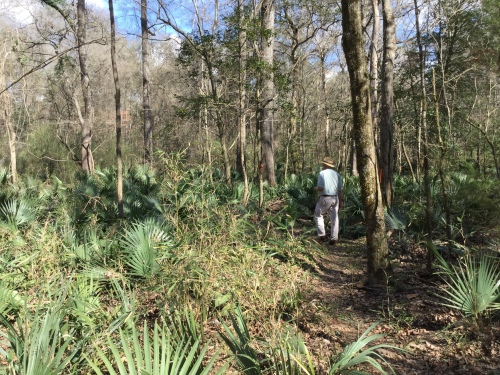 Even without the wonderful flowers, the walk would have been delightful. There are many hardwoods in the comparatively young forest. We found white oaks, live oaks, and some hornbeam trees. The hornbeam belongs to the birch family but I thought the leaves looked like those of a beech tree. The trunk is naked like a crepe myrtle. There were also maples, sweetgums, and beeches. And under the beeches were some very interesting little growths called beech drops. They are completely sustained by nutrients from beech tree roots, according to the marker.

We came alongside two creeks, one deep enough for a shallow swim in places. The sun was shining through the slow moving current showing a ripply sandy bottom.

Folks we met on the trails were from Thomasville, Tallahassee, and places beyond, They were all, including several young children, enjoying the spring day at this unusual preserve so nicely protected and sustained.

Thank the Lord for the foresight of all those who had a part in making this preserve possible, our friends the Hinsons and many, many others. Thanks also to the Eagle Scouts for a very nice sign at the entrance off Wolf Creek Road.

I urge you to discover the sights at the Wolf Creek Trout Lily Preserve between Cairo and Whighan. Look them up on the web!

One response to “Trout Lilies”