Someone told me she was collecting waterfalls. She meant that she and her husband hunt for accessible waterfalls, she takes pictures, and then can recall each trickling or thundering one of them. I was intrigued. Now there’s a collection that would be such fun to build and wouldn’t have to be dusted. The same could be said for a collection of springtime treasures, even without the pictures. See if some of mine are in your collection.

Now back to the collector of waterfalls, I wish I could remember who that was so I could find out how many she found, where they are, and what their names are. Ever hear someone talking about a waterfall collection? I think they’d have to choose some of the ones we know: Toccoa, Ruby, Dry, Amicalola, Panther Creek….

The flowers appear on the earth; the time of the singing of birds is come, and the voice of the turtle is heard in our land. Song of Solomon 2:12

It was cold viewing the Statue of Liberty

Before we left on our spring break trip to New York, I said humorously, “New York will never be the same again!” And now that we’re home, Charles and I in Cairo, our daughter-in-law Christi and our three grandchildren in Birmingham, I realize how true that prophesy was. I’m not silly enough to think anyone is going to find our six sets of footprints on the concrete streets, the elevators, escalators, boats, buses, restaurants, museums, Ubers and taxis. But, to us, New York will never be the same again. We have a newer, clearer, truer picture of the social/arts/heartbeat city of our nation.

We studied dinosaur skeletons, Egyptian mummies, and African mammals at the Museum of Natural History. We took the Statue of Liberty cruise and did due homage to the beautiful iconic statue; we read about the plight of immigrants at Ellis Island, and enjoyed an extensive harbor cruise with a guide who filled us in on facts, scandals, and myths as he talked about bridges, buildings, and politics. We rode sightseeing buses all around the city always finding seats on top. Even in the rain we had glass over our heads and could see the streets full of yellow taxis, could view tall buildings crowding the sky, Radio City Music Hall, Trump Tower, the theater district with familiar titles that peaked our interest, and beautiful Central Park.

It was raining the afternoon we walked in Central Park but that was one of our must-see places so we did it anyway. It was still winter there the last week of March. Tree limbs were bare and brittle looking against a gray sky. But jonquils bloomed here and there. And quite often we spied patches of snow left from the blizzard two weeks before. It was cold and windy as we posed on a bridge in our ponchos for our picture in Central Park. As we walked back towards a street where we might catch a cab I could hear Mattie (8) behind me repeating plaintively every few feet, “But where is the playground?”

We went to a basketball game (Knicks vs. Pistons) in Madison Square Garden. We hugely enjoyed seeing our grandsons choose jerseys in the gift shop and we all, of course, rooted for the Knicks. We had delicious hotdogs and popcorn while watching the game from excellent seats. The fanfare and hoopla were up to all expectations, so colorful and festive. And the Knicks won! 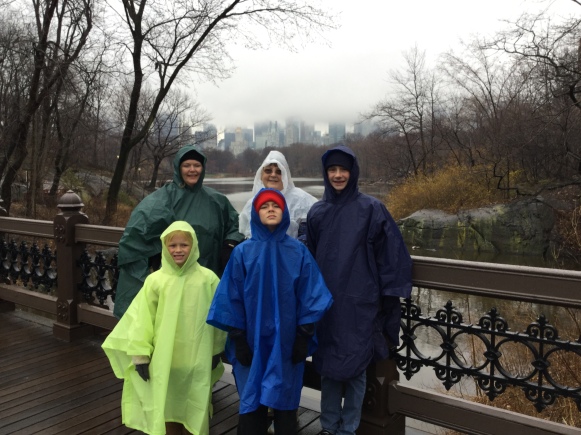 Central Park on a rainy day

We started out early on our last whole day in New York headed for the Empire State Building. This was one of our all-around favorite adventures, I think. We loved seeing the city, the harbor full of boats, the many bridges, everything, from the top. From there we took an Uber to Ground Zero.

The memorial to victims and heroes of 9/11 is so well done. And the museum, to me, is a must for a visitor to New York. We chose to do the self-guided tour which took about an hour and a half. The whole experience is horrendous, touching, and forever memorable. Through the use of videos, posters, pictures, pieces of walls, airplanes, personal things like a backpack or a purse, we were given a composite of the terror of that fateful day in New York, Pennsylvania, and the Pentagon. A banged-up burned fire truck is there to remind you of those brave responders who climbed stairs to help others, knowing they wouldn’t be seeing the light of day again on this earth. As we entered the museum, we became very quiet in respect. There was no sound of laughter or chattering, just soft voices of explanation as we all tried to grasp the magnitude of what had happened and explain it to the children. The part which made tears well in my eyes was the sound of voices repeating their loved ones’ names at a memorial ceremony: “My father __________, my husband ________, my sister__________…” Our three children were really respectful and interested and I was so proud of them.

We really packed a lot into that last day. We had high tea at the Russian Tea Room at 3:00 in the afternoon. Charles tried to dash a little politics into the mix but didn’t get far! We all were treated like royalty in this extravagantly decorated place with soft music playing. We ate tiny sandwiches, little cakes, and drank our tea with pinkies curled.

All my life I’ve heard and read about Broadway plays but never been to one. Well, now I have! We went to see Lion King and had center mezzanine seats looking right down on the stage. I’d seen the movie over and over with different ones of the grandchildren so I was really curious as to how the actors would present this live performance. It was magnificent! The animals were all in character, either people with masks or people with lifesize puppets and other such inventive ways of bringing life on the stage. Sound and lighting and stage props made the desert so real and the hyenas so horrible! Charles had particularly intended to wear his hearing aids that night to be able to hear all the lines but—he forgot them! And he could hear anyway, the sound system, acoustics, and all were so good. I was truly charmed by young Simba and Nala, such cute children playing those parts.

When we left the theater to walk back to our hotel, Time Square was lit like daytime, or even brighter. We felt safe walking the street and enjoying one last evening of the competitive sounds of taxi cab horns, the tall lit buildings, the mass of humanity.

So how is my view of New York changed? First of all, everyone was very friendly and helpful, contrary to my idea of folks in big cities. Second, I knew the city was full of tall buildings but I couldn’t imagine one could ride for miles and miles and still be surrounded by tall buildings. Third, the masses—so many people of so many different cultures! I kept thinking as I’d look into their faces and wonder if they were just getting off work or were going to meet someone special or were like us, strangers in town—I’d think every person, every single person, is someone for whom Christ died, but only a few know that. Fourth, I felt a deep respect for law enforcement employees, more than ever before. And fifth, I’m more convinced than ever that we live in the most beautiful blessed area of the whole earth, our little corner of Southwest Georgia! But I do miss being able to go up so high and look out far and wide. And we miss the friendly Uber drivers.

A street scene in Chinatown

We all talked about our favorite part of the trip as we waited to board the plane back to Atlanta. Some enjoyed the Ninja Restaurant the best, some the Empire State Building, others the river and harbor cruises. But one of the things I’ll always cherish is the sound of our three Graham grandchildren enjoying games of Author cards and Categories in our neat room on the 12th floor of the RIU Plaza Hotel.